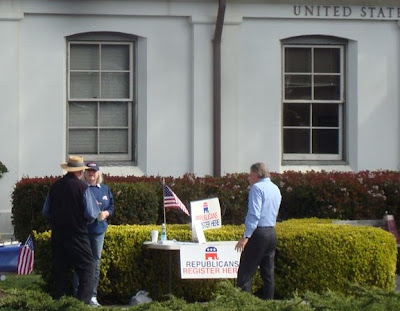 That's Michael Eric, not Esther. On Republicans' continuing disrespect for the office of the Presidency and for our current President in particular. On open fabrication, making things up out of whole cloth, followed by "who, me?" claims to have "misspoken."

(h/t NewBlackMan)
Posted by ProfGeo at 12:45 PM No comments:

Clutter: Not about the stuff, though stuff is all about you

Two posts that remind me of how I've totally fallen off the wagon with my book-reduction project:

1) Hoarding Insecurities from Andrew Sullivan, who apparently is still at the Atlantic right this minute. How did he decide on exactly 200 books, not 100, not 250, to be read in his dotage?

2) Deep Cleaning and Other Cosmic Issues from Claire B. Potter, which apparently inspired Sullivan to inspire himself and indirectly to chastise those of us who will certainly someday most assuredly get around to sorting through whatever there is a pile of in our vicinity. And I will verify for Potter that it's not just a white thing.

The flaw in both the Sullivan and Potter posts is their reference to a "pile of unused CDs," which argument makes not the least dent in the hoarding guilt-armor (pun not intended) of anyone who still has a substantial number of vinyl records.
Posted by ProfGeo at 10:58 AM No comments:

Labels: 2 out for every in, books, hipster racism, life imitates art, sorry-ass excuses

FYI, our pal at Prometheus6 is in the hospital (which is why it's been quiet over there) and he could use some positive thoughts, I'm sure.