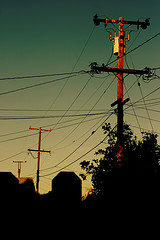 Ending basic "last resort" land-line phone service in rural areas would dismantle yet another safety net. If you don't think it applies, I suggest it looks like a test case for doing the same in unprofitable urban areas.

h/t Zandar for semi-channeling the late Jim Croce (and a JJP commenter for pointing this story out in the first place):

Monday, February 20, 2012
You Can Keep The Dime, OperatorPosted by Zandar

When you privatize a utility and cry "Government has no business in business!" and leave everything up to the free market and profit motive, you invariably get people who are priced out of the market.


McClatchy stories tend to be around for 7 to 14 days before archiving, so take a look early at the details here:

FRANKFORT — Kentucky's telephone industry wants the option to end basic phone service in less profitable parts of their territories if other communications options, such as cell phones or the Internet, are available in the area...

"For a lot of people in Eastern Kentucky, their land line is their life line," said Cathy Allgood Murphy, AARP Kentucky's associate state director. "They may not be able to afford an Internet connection, and they don't have cell phones because their communities, in the mountains, don't get cell phone reception."

The industry is pushing Senate Bill 135, referred to as "the AT&T bill" by its sponsor and others because it originated with that company's lobbyists...

That's 31 lobbyists in Frankfort alone, by the way.

P6 is busy. I think he'd appreciate some posts from the network.

I immediately thought of Prometheus6 when I saw these two techie items. He is real-world occupied as you can tell from his site. We can't fill his shoes but how about jumping in on your own blog or site with a P6 topic?

Second, the civilian version of the "We know what you're up to" drone:

Animal rights group says drone shot down
...Steve Hindi, president of SHARK (SHowing Animals Respect and Kindness), said his group was preparing to launch its Mikrokopter drone to video what he called a live pigeon shoot on Sunday when law enforcement officers and an attorney claiming to represent the privately-owned plantation near Ehrhardt tried to stop the aircraft from flying...


And here's the homespun video of the incident. (Sorry, no embedding for this one.)

Posted by ProfGeo at 8:11 AM No comments:

Since there has been quite a gap between my last post and this, I want to start on a positive note that is nonetheless on the theme of reclaiming "the other two-fifths" of the existence that was designed into the U.S. Constitution at the end of the 18th Century. There is bound to be plenty to grouse about later as this election year unfolds.

The first snippet below comes from excellent coverage a few days ago at Inside Higher Ed. If there were no month of February, we'd have to invent it just to accommodate stories like this:

The litany of bad news about the status of black men in higher education is by now familiar. They make up barely 4 percent of all undergraduate students, the same proportion as in 1976. They come into college less prepared than their peers for the rigors of college-level academic work. Their completion rates are the lowest of all major racial and ethnic groups in the U.S.

Shaun R. Harper is tired of hearing the list. It's not that he believes it's inaccurate -- the facts are the facts -- or irrelevant. But what troubles Harper, an associate professor of higher education at the University of Pennsylvania, is that it's pretty much all that we hear, in higher education research, in news reports, and as reflected in campus policies. That single-minded theme struck Harper personally as incomplete, since it didn't reflect his own experience or that of many black men he knew... [emphasis added]

Professor Harper could have just kvetched, but instead undertook the largest qualitative study to date that takes as its premise black male success and not black male pathology, the National Black Male College Achievement Study. Here is the link to the PDF of the study:

Enjoy!
Posted by ProfGeo at 2:28 PM No comments: