Here's a clip related to the previous post about Labor Secretary Hilda Solis's March 20 speech at the California Faculty Association's Equity Conference. She talks about the financial support she received back in the day:
(Video by ProfGeo)
Posted by ProfGeo at 1:46 PM No comments:

As I have commented elsewhere, affirmative action isn't dead in California, it's just manifested differently since Proposition 209 passed. Any entity (like our very large public university systems) desiring federal dollars will comply with federal affirmative action requirements, but some will be more public about it than others.
The above is to set the context for the fact that U.S. Secretary of Labor Hilda Solis spoke yesterday to an arm of the California Faculty Association (Cal State's faculty union). The assembled Council for Affirmative Action welcomed her with open arms at our 2010 Equity Conference. (Full disclosure: I'm not a member of the council, just one of many faculty members who attended.)
If you think she just swung by because she had Saturday morning free, I have a bridge to sell you. My take is, she wanted to come anyway, but I bet the March 4 Day of Action with its thousands of participants got some people's attention. Solis was the right person to send, as she is a graduate of the Cal State system, she's from a low-income background, and benefited from a Pell Grant, an Equal Opportunity Program, and more. And she wouldn't be where she is if certain doors had remained closed.
I'll update this with some video I shot after I check it.
Posted by ProfGeo at 10:50 AM No comments:

I'm not at SxSW, but don't blame Texas

I've been sort of tuned in to South by Southwest since David Byrne spoke there in 2007 giving both elegy AND eulogy for the medium known as the CD.
This year, several people of my cyber-acquaintance have or had presences at SxSW 2010.
Bob Davis of Soul-Patrol.com (and Soul-Patrol.net) will have a panel March 19:
Posted by ProfGeo at 8:30 PM No comments:

Why I hate the Confederacy, Part IV: Dumbing down U.S. history

Efforts by Hispanic board members to include more Latino figures as role models for the state’s large Hispanic population were consistently defeated, prompting one member, Mary Helen Berlanga, to storm out of a meeting late Thursday night, saying, “They can just pretend this is a white America and Hispanics don’t exist.”
“They are going overboard, they are not experts, they are not historians,” she said. “They are rewriting history, not only of Texas but of the United States and the world.”

I guess this is the famous line in the sand. Between this and the refusal of Texas to get on board with 48 other states supporting the Common Core framework for K-12 learning, I fear for my several Texas relatives who are in the public schools. The Civil War is never over, is it?

March 12, 2010
Texas Approves Curriculum Revised by Conservatives
By JAMES C. McKINLEY Jr.
AUSTIN, Tex. — After three days of turbulent meetings, the Texas Board of Education on Friday voted to approve a social studies curriculum that will put a conservative stamp on history and economics textbooks, stressing the superiority of American capitalism, questioning the Founding Fathers’ commitment to a purely secular government and presenting Republican political philosophies in a more positive light.

More disgusting details from a March 10 New York Times story: "References to Ralph Nader and Ross Perot are proposed to be removed, while Stonewall Jackson, the Confederate general, is to be listed as a role model for effective leadership, and the ideas in Jefferson Davis’s inaugural address are to be laid side by side with Abraham Lincoln’s speeches."
Posted by ProfGeo at 3:53 PM No comments:

Every now and then someone tries this one 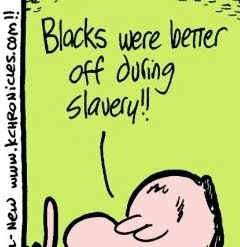 Trent Franks (R-AZ, which may mean he deserves razzing) may or may not be a distant relation of former congressman Gary Franks (R-CT) who seems to have disappeared after being proudly black and against affirmative action during the 1990s. We'll need Skip Gates to check that out in his next PBS special.
What we know for sure about ol' Trent Franks (and what is it about people named Trent in Congress making racist remarks, anyway?) is this: He famously said a few months ago that President Obama is an "enemy of humanity." Oddly, that remark wasn't considered treasonous or worthy of FBI investigation (that we know of). But he is newly famous for injudiciously suggesting that black people were victims of a greater scourge than slavery.
That's been discussed at length elsewhere, and by some the remark is being dismissed as just a lame attempt at getting brownie points (ironically enough) from the pro-life crowd. I am concerned, though, that there is a never-ending nostalgia among, er, certain folks for the good old days when, uh, certain other folks knew their place, and they'll grasp at any straw (any straw...! You cannot be serious!) to keep the memory of those days alive. Every time you want to go all post-racial and do a national group hug, somebody serves up a gentle reminder as Franks did.
Of all the commentary, I like Keith Knight's editorial cartoon best (so far). He's in my faves section in the left menu, but here's his Trent Franks rejoinder. Sample above, full cartoon at the link.
Posted by ProfGeo at 7:22 AM 1 comment: